​​Professional philanthropy means I've spent my entire career facing Big Asks, and I'm proud to say that Big Asks aren't only manageable - you can even learn to love them!

THE LADY WITH THE BIG ASK is here to teach you what it takes to ask for what you want and get it - from donors, board members, bosses, coworkers, employees, and in your life.

BACK TO MAIN PAGE 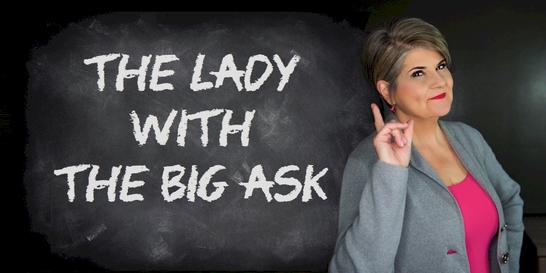 ​ASKING FOR WHAT *YOU* DESERVE

From one-on-ones with donors to making speeches at massive fundraising events, if you’re like me, you usually make Big Asks for something that someone else needs or wants.  And it’s often easier to find the courage for a Big Ask when you’re asking on behalf of another person or cause.

But what about when you need to make a Big Ask on behalf of yourself?

Do you have the same courage of your convictions?...
Do you feel confident about clearly and compellingly stating what YOU need or want?...
Are you able to use the same tools we’ve been talking about in this blog – building relationships, preparing for success, and using all your avenues of communication – when the subject is you?...

Let me tell you a story about what can happen when you apply the “Big Ask” rules to yourself!

Last month I was on a business trip to New York, and found myself stranded at the airport due to issues with my plane.  Well actually, it was due to issues with SEVERAL planes, in what turned out to be an epic experience involving being shuffled back and forth between different gates, being kicked off of a plane that had a broken weather detector, being kicked off of a second plane after it was discovered its computer wouldn’t boot up, having one of our pilots fall ill, and then being denied entry to a third plane when it turned out to have a broken seat-back tray!

In the end our departure was delayed over six hours, and what was supposed to be a quick flight turned into an exhausting and extremely frustrating day.

I didn’t get mad.
I didn’t complain.
But I also didn’t remain silent.
I tweeted!

To my surprise, the airline quickly responded!  They expressed sympathy and asked me to privately direct-message them my flight confirmation number.  I did as asked, and to my further surprise they again apologized - and then offered me either a $125 travel voucher, or 5,000 miles.

I could have accepted that offer… But they don’t call me "The Lady With The Big Ask" for nothing!

I had presented the situation clearly.  I had built a positive relationship with the airline by giving kudos for what was going well (“staff is great”), and not just expressing what was frustrating.  I had laid the groundwork to make a Big Ask – on behalf of myself!

As our plane finally took off, I began thinking back over all the times in my life that I’ve spoken up for myself,  all the times I have made a Big Ask for something I felt I needed or deserved.  And the fact is, the results have been amazing.   From being comped on expensive meals and drinks, to being sent free designer shoes, to getting price reductions on retail items - when I’ve made a relationship with the person I’m speaking to, expressed my positions clearly and compellingly, balanced out negatives with positives, and prepared for success – a successful Big Ask is what I’ve achieved.

My friends call it “Lisa Magic” at work, but you and I know it’s not magic at all!  It’s just using the same tools that we’ve been discussing here – tools that work whether you’re talking to a high-level donor, a packed auditorium, or just tweeting to an airline.

So get out there, and never be afraid to make the Big Ask – for a cause - for an organization - and for YOURSELF!